Aquatic vegetation comes in many forms, and so we might expect that long, flexible, buoyant vegetation such as kelp does not behave in the same way as relatively short, stiff salt marsh plants (see the page here for our work in this latter case).  Therefore, collaborator Conrad Pilditch and I set out to explore how kelp moves under waves.  Our kelp species of choice was the giant kelp Macrocystis pyrifera – which can grow up to lengths of 45 m and has the ability to withstand large wave forces.

We undertook a field experiment at Aramoana in Otago on the South Island of New Zealand (which incidentally is a fantastic spot to go for a dive).  We instrumented some kelp specimens over the entire stipe with regularly-spaced accelerometers to capture movement at different heights up the stipe bundle.  The kelp were placed a short distance from other kelp to avoid entanglement and we also placed an ADCP nearby to record water velocities.  Two accelerometers are visible in the image of the kelp on the right.

The accelerometers then recorded the tilt of the kelp as it moved back and forth under waves.  These tilts revealed some interesting and some quite surprising results!  Firstly, you could easily discern motion of two frequencies of motion – the swell motion with periods of around 9s, but also movement at the longer (60 s) period. The figure below shows a short time series of tilts from a single axis. You can note smaller scale oscillations at the swell frequency superimposed on the longer-period motions. 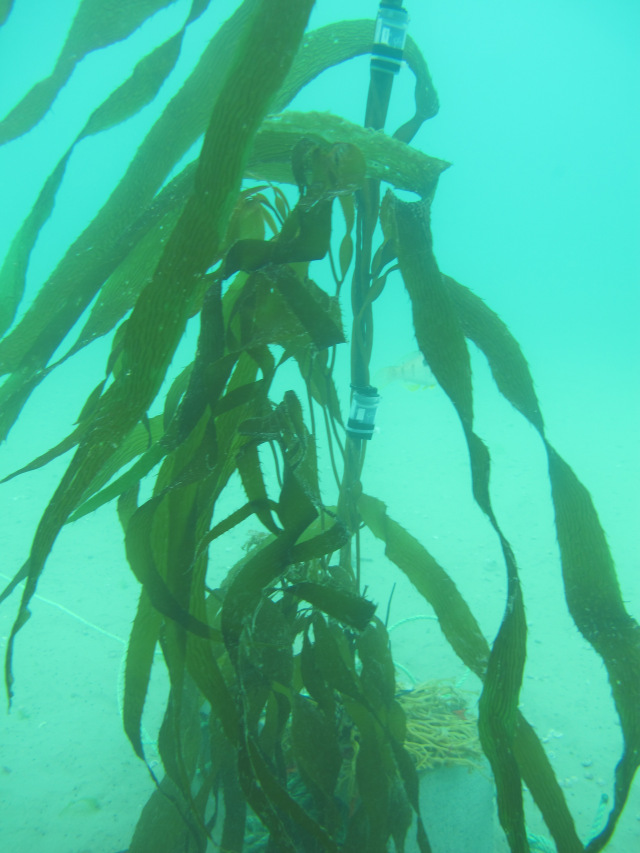 However, the unexpected aspect of this movement was seen in terms of the depth dependence:  The kelp tilted more strongly at the infragravity frequencies close to the surface. Conversely, at the swell frequencies, tilting was more pronounced at the base of the stipe, close to the seafloor.  The figure to the right shows example power spectral densities of tilts (sum of all three axes) from sensors at different heights (indicated by colours) above the holdfast.  Responses at the (a) infragravity and (b) swell frequencies.  The insets show a schematic of kelp shape implied from the spectra of tilts. Note the change in y-axis scale between (a) and (b) and that the displacements shown in the insets are not to scale – the tilting associated with the infragravity frequencies is approximately 5–10 times larger than that associated with swell frequencies.

We attributed this result to stretching out of the blades at the IG frequencies but not at the swell frequencies. This conclusion was also supported by manipulative experiments in which we removed the blades from one kelp, at which point the movement became much more depth-uniform. The depth-variable response implies energy would be differentially dissipated over the kelp length and over forcing frequencies.  The response may also have some intriguing consequences for boundary layer formation and nutrient uptake!  More details can be found in our (open-access) Limnology and Oceanography paper. 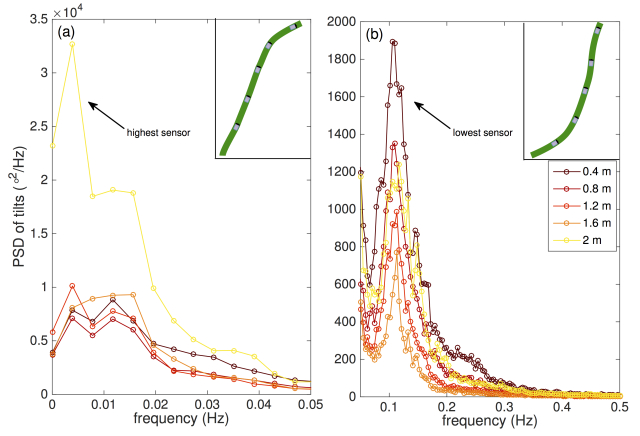 Thanks to the PADI foundation and the University of Waikato for funding.