Estuaries are constantly evolving. Factors such as sediment input, tidal currents, and (often) human interventions, control whether coastal basins are a permanent sink or temporary reservoir for sediment. We have been investigating how different factors contribute to morphological stability or instability of coastal systems. In particular, PhD student Peter de Ruiter has been examining the complex links between the entrance geometry, hypsometry (shape), winds, tides, and sediment transport in estuaries.

The first part of the work was based around Tauranga Harbour in the North Island of New Zealand. The harbour is composed of multiple sub-basins with different geometries, levels of infilling and hydrodynamics. We focussed on six of these: three of the sub-estuaries experience relatively high sedimentation rates, and as a consequence tend to be quite shallow; conversely, the other three are characterised by lower rates of sedimentation and larger tidal prisms.

By using a combination of field data and numerical modelling approaches, we found clear differences between sub-estuaries with constricted entrances  and those with open entrances. The constricted basins were infilled, characterised by relatively elevated intertidal flats (and can be described as convex-shaped; while the unconstricted basins displayed a more concave shape with lower intertidal regions. This distinction is clearly visible in the hypsographic profiles (blue colours are basins with constricted entrances, while red and green colours are unconstricted), which show normalised basin area on the x-axis against water depths on the y-axis. 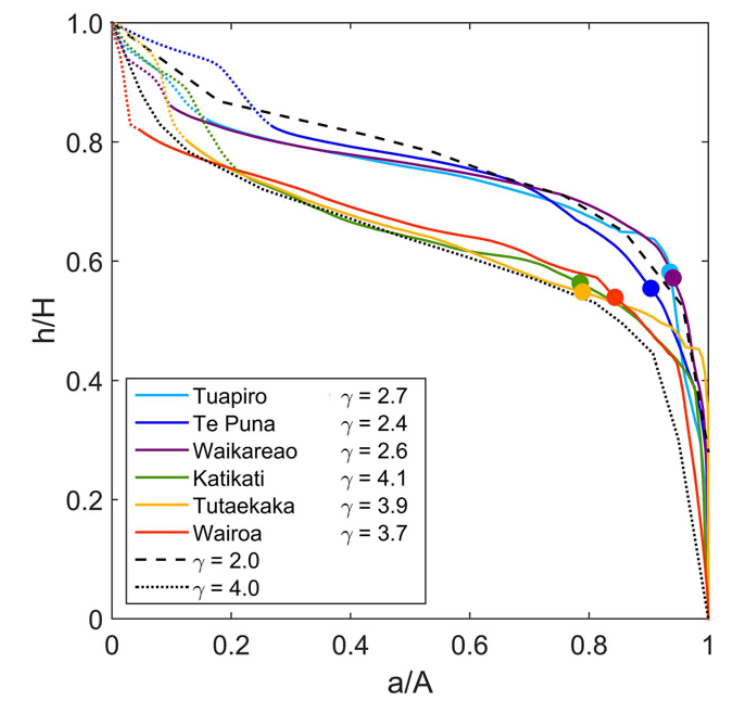 Peter then used a series of numerical model experiments in idealised basins to explore how wind events can alter the patterns of horizontal velocity asymmetry, and how these changes depend on wind speed, direction, timing (relative to the tidal phase) and duration. The figure below shows one example of changes in velocity asymmetry induced by winds in a constricted basin: Here, stronger wind speeds (wind speed increasing across left to right panels) promoted more extreme asymmetry ratios without substantially changing the overall patterns of velocity asymmetry.

Overall, modelling results indicated that wind direction is the driver of the largest changes in velocity asymmetry, with changes most evident for wind directions parallel to the main axes of the basins’ tidal channels. Similarly, wind events coinciding with flooding tides result in the most noteworthy differences between the relative size of the peak flood- and ebb- directed currents inside the shallow basins. However, the velocity asymmetry is strongly depth-dependent. Our study also found, for some conditions, that wind forcing is capable of fully reversing the direction of horizontal velocity asymmetry signals in both the intertidal and subtidal regions.

The ability to estimate tidal asymmetries is advantageous when developing management strategies for coastal sedimentation. For example, the removal of an entrance constriction may result in a higher-energy tidal basin environment. The associated increased erosion potential may be preferred in shallow environments where navigability is of prime importance. Moreover, the influence of wind over a tidal cycle can produce the velocity asymmetries necessary for sediment transport at relatively short timescales. Consequently, the ability to predict future pathways of morphological change in tidal basins relies on meteorological conditions as well as well-defined local tidal regimes.

Many thanks to the Bay of Plenty Regional Council for funding this work.