As a PhD student I was fortunate enough to work under the supervision of Professor Ross Griffiths at the Research School of Earth Sciences at the Australian National University.  My work there used laboratory analogue models to examine the role of buoyancy forcing in the meridional overturning circulation of the oceans. Here’s my laboratory tank which represented a hemisphere to pole model of the ocean. Note all forcing is applied at the base for experimental convenience (so we simply invert gravity to interpret the results in the oceanic sense).

The thermally-forced experiments and non-hydrostatic numerical simulations demonstrated the important result that a vigorous overturning circulation can be driven and maintained by a thermal buoyancy flux applied at a single horizontal boundary.  This result strengthens the case against ‘Sandström’s theorem’, which states that a closed steady circulation can only be maintained in the ocean if the heat source is situated at a lower level than the cold source.  Furthermore, my experiments provided the first laboratory ‘horizontal convection’ observations of a convectively mixed layer and localised turbulent downwelling embedded within a statistically-steady large-scale circulation.  Details can be found in Mullarney et al. 2004 (JFM 516). Here’s an image of the convective mixed layer in action (shown by the blue dye). 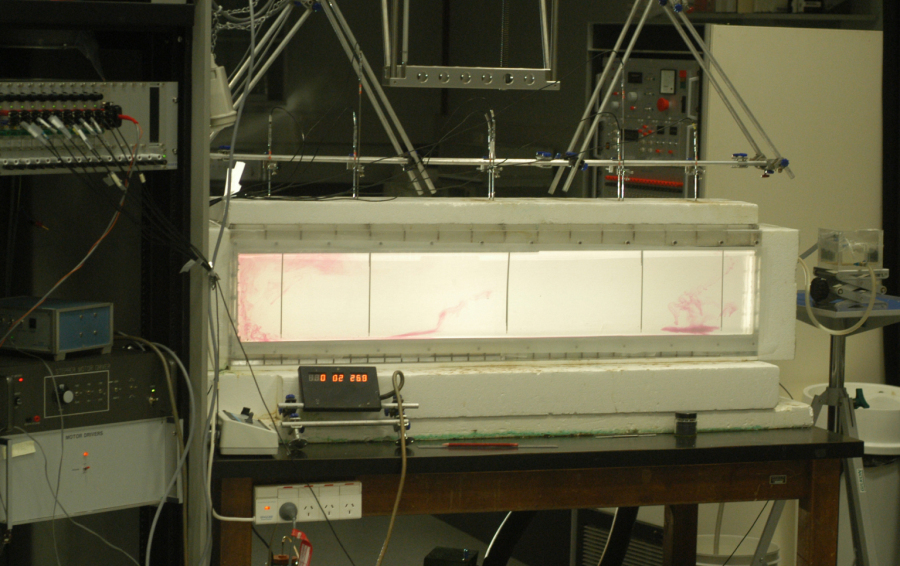 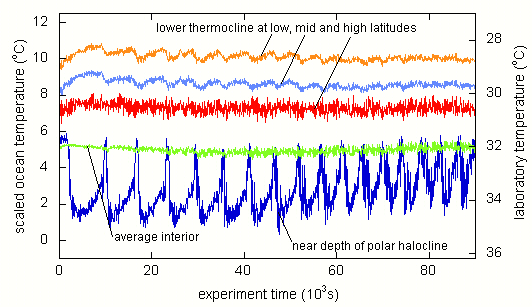 My experiments with the addition of a stabilising freshwater flux characterised transitions between a series of regimes as the freshwater flux increases: a quasi-steady circulation analogous to the present day overturning in the North Atlantic, an oscillatory regime in which there is periodic formation and breakdown of a polar halocline and lastly a regime, in which the upper ocean is flooded with fresh water and deep convection ceases (see Mullarney et al. 2007, Deep Sea Research 54).